Did That Just Happen? 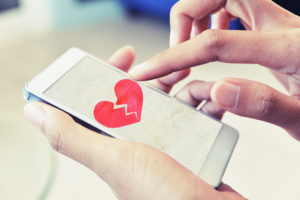 Oh wait, no way. You’re kidding. He didn’t just say what I think he did, did he?

But, he did. He said exactly what I thought he did. Unfortunately, it’s more about HOW he said it than WHAT he said. Guys, I got broken up with via text.

I am addicted to my phone. Accused and charged, 100% addicted. I text more than just about anyone I know. If I’m not texting I am on my death bed staring in to the white light or I’ve changed the passcode while sleeping (this has happened twice now).

I think texting is a completely acceptable and convenient way of communicating. You can fight via text, send happy birthday texts, congratulations on getting knocked up by that one-night stand texts, what are you up to later tonight texts, I’m bored entertain me texts, hypothesize the meaning of life texts, hell I don’t even mind if you send novel worthy texts. All are deemed acceptable in my eyes, all with the exception of professing your love and ending a relationship. That’s it. Absolutely it.

Ending a relationship via text, no matter how short or long-term it was, is insanely selfish, cowardly and makes you look like a child. I know teenagers that know better than to do this, and they still think that farting on their friends’ faces is funny (ok, it is a little but that’s not the point). When you end things with someone digitally you remove the human component that brings us all together in the first place. You are saying to that other person that they were cool enough to hang out with and have sex with, but don’t mean enough to you to show them actual dignity and respect. What the what. How does this happen?

The majority of us are in our 30’s by now. This isn’t our first rodeo in the relationship department. We’ve dated, fell in love, broken up with someone, been broken up with and felt all the emotions associated with each one. We know what each side feels like by now. Listen, I know showing and experiencing face-to-face vulnerability is difficult. It’s uncomfortable and makes your butt do that pucker thing like when you look over a cliff. But, it’s the only heartfelt way to connect and disconnect with someone. You don’t need to drag it out forever or make up excuses, just sympathetically say things aren’t going to work out and here’s why. Looking that person in the eyes and delivering bad news is never fun, I get that. However, it shows the other person that they did mean SOMETHING to you, after all you did spend a considerable amount of time together and inevitably created memories. Otherwise you leave them feeling disrespected and undeserving of your emotions.

So guys, we all need to retire the ambiguous, open-ended break-up text immediately (just like Scaramucci’s political career – ba da bing). You’re better than this, and I’m sure they were too.

Amanda spends her days building client strategies, shaking hands and kissing babies (not literally, gross). You can frequently catch her shoveling tacos into her mouth, parenting the one they call Jude, twisting her body into a yoga pretzel and drinking Bud Light with friends - a true multi-tasker of this generation. She enjoys calling you out on your bullshit and writing about it for all to see.