If you’ve come here because the title spoke to you, you’re probably going to be disappointed. This post serves as an introduction to my dogs, Maggie and Max. I love them like children but dear God, are they assholes.

He’s a 9 pound Yorkie with the cutest face around.

*Only with people he really loves. AKA me and my ex. 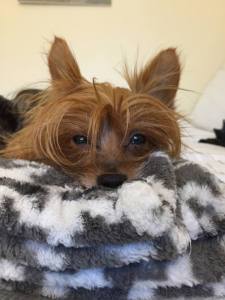 Maggie’s too sleepy to care about you.

Five pound Yorkie. 100% the most adorable dog on the planet.

You see, I love those shit heads no matter what. But their personalities are vastly different. If you haven’t given a whole persona/voice to your dog, you should. If you think it’s ridiculous, you should stop reading right now.

Max has a lot of anxiety. He hates new people, especially men, and other dogs. He has a psychotic bark that makes people worried he will rip their face off, but really he’s just scared and has never bit anyone. He’s been this way since I got him and no matter what I do, I can’t seem to break him of it. Through the years, we’ve determined the cause: he was born this way. And “this way” is gay. He’s really uncomfortable with his sexuality and can’t seem to grasp that it’s ok to be anything other than straight. So, he “hates” all men. It’s easier than being attracted to them and blowing his cover. His voice is a bit feminine and often he comes across as an airhead. (PS – he’s only humped two people/things. Both of these were human men. One was gay. Point made.)

Then, there’s Maggie. At first, people think she’s sweet as pie but a bit sassy. In reality, she’s a chain-smoking, expletive-dropping, raspy-voiced bia. She wants nothing but for people to pay attention to her, give her pets and tell her she’s beautiful. She needs to be next to you on the couch and will give you doe eyes to get whatever she wants. She sucks up to the humans but constantly bullies Max for being flamboyant (which doesn’t help his self esteem).

Let me give you a sample (very NSFW and inappropriate) convo between the two of them:

Max: Oh dear, I’m just shaking in my loafers about these new people that came into our home. I think I’ll bark because that one guy is cute. Er, I mean, he’s a BAD MAN. He’s going to get us. Get us hard..

It’s not ok, but they have this dynamic that I can’t deny. Sometimes they’re at odds. Sometimes they lie together in a dog bed and make your heart melt.

I do what any respectable (dog) mom would do: let them work it out on their own.

Disclaimer: I do not condone any hate towards the LGBT community. Maggie and I have a talk every time she rasps out a gay slur. It’s unacceptable and that’s where I draw the line. Some of my closest friends AND sister are gay and I’m one of the biggest supporters you’ll find. More on this later.